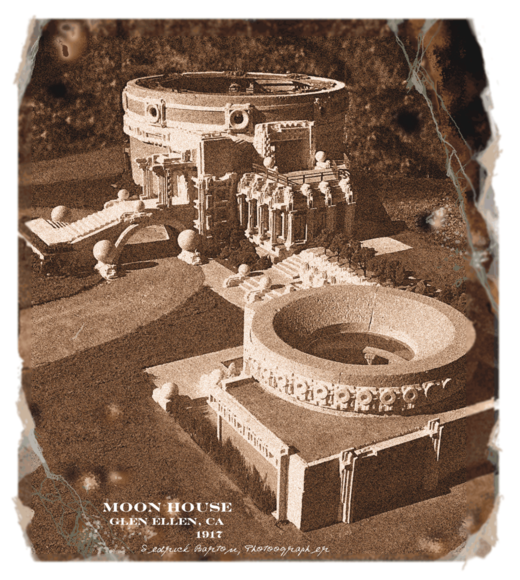 THE MOON HOUSE as it appeared upon completion in 1917.

The Moon House Antiquarium is as much story as house—rather, the continuation of a story set in an earlier “Moon House”—the famed mansion built in 1917 by Wilson’s mercurial great uncle Augustus Fenn  (see below: “The Legend”). It was here, for two halcyon decades, that the reclusive inventor and his circle of eccentrics played out their days.

The house was destroyed by a mudslide in 1937.

Many years ago (1917) there rose a house. Or, more accurately, a dream—the all-consuming vision of the eccentric who built it—Dr. Augustus Fenn. His architect, the modest and private Julian Bhigg—the pioneer of Fusion Geometrics—regarded the house as his magnum opus and would remain under the doctor’s employ for the balance of his life. Together, patron and artist formed a legacy of both harmony and acrimony that gave rise to a Sonoma Valley legend. For six long years, brick by meticulous brick, 28 full-time laborers toiled at the site—a meadow high in the Mayacamas once sacred to the Wappo, where acorns were said to be sweet and plentiful. Below, in a light-struck ribbon of creek, steelhead darted silver across shadowy pools. [modern-day Glen Ellen] The Moon House is what the manse came to be called. Season after lovely season, for 19 years, its walls took on fame.

Then came 1936 with its brutal, weeklong deluge. On December 31, just before midnight, locals woke to an eerie roar and, some say, an ascending arc of light. At dawn the townsfolk climbed the old Stage Gulch Pass to see what they’d heard. Ghastly!—a whole hillside slipped away—a great wave of mud, still steaming and strangely malodorous. And below, swallowed in muck and slime, Dr. Fenn’s magnificent Moon House, now a slump of sheared off walls and scattered columns. For 48 years the house lay buried—looted, flooded, and ravaged––all but forgotten.

And then, in 1984, remembered. Or, more accurately, re-loved—mapped, cleared, and excavated by Dr. Fenn’s great nephew, artist Douglas Fenn Wilson. Bit by bit he salvaged what remained––columns, facades, porticos, sculptures, and artifacts––hauled them down the mount to the heart of historic Glen Ellen, where he pieced them together anew.

And then, as if never gone, there it was again—new from old—a celebration of fragments, luminous against the black Mayacamas.